Some of you will not be surprised but this blog will end from now to be totally focused on the Facebook page.
Then this is true some do not have yet an account, they dislike Facebook, etc. but whatever is done, it is not possible to make everyone happy. Moreover there were not really reasons to keep this blog while doing the same thing on Facebook.

And from now, I will ask you, all the people who can understand English all over the world, something. I know there are more than 1700 fans of Up-Front artists... Many thousands fans came to see Morning Musume。, HANGRY&ANGRY-f and Berryz Kobo in America for example.
We can easily reach 10 000 fans, so are you ready for this bet?

So to all of you, you know what do you have to do now: like the Facebook page of Up-Front Link. The more who will be, the more exclusive pictures, live-reports, etc. you will have. You will not be disappointed ;)

Thank you all for your support!!

And for the Facebook page, this is HERE.
Posted by UP-FRONT LINK at 13:54 7 comments

Email ThisBlogThis!Share to TwitterShare to FacebookShare to Pinterest
Labels: Other

On saturday, You Kikkawa held some special talk show events with a limited number of fans at Universal Music.

She put it on a table and the MC directly asked her about her next plans. 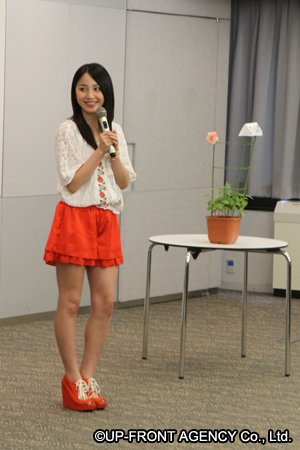 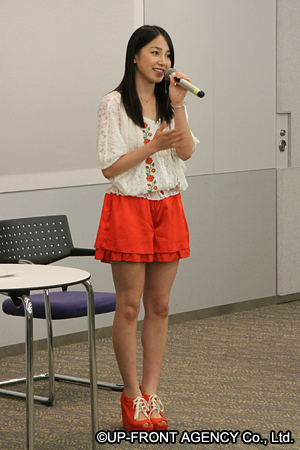 She talked about her new photobook YOU and her DVD YOU! ～The DVD～ (both released on August, 17th).
It was her first time being in bikini so it was a bit embarassing at first but she really liked to do it, as well as Okinawa. She thinks this is a beautiful place. 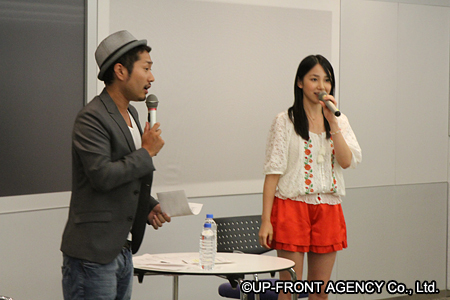 Furthermore she talked about her new single Hapirapi ~Sunrise~ (released on September, 21th) which is the theme song for the exposition Nippon Terebi Shiodome Hakurankai 2011!.
The main point of this song is this is a fresh one for her, this is a song you can listen in the morning.
She is really happy about this release and will do her best once again.

Following this there was a small break with the diffusion of video where Universal directors has announced her she will be a solo artist.
Just after she gave her impressions about it. She really did not expect anything like this so she said she was saying yes and everything but she needed more time to really understand what was the announce.
Everything was so unreal for her, but now she is happy!! 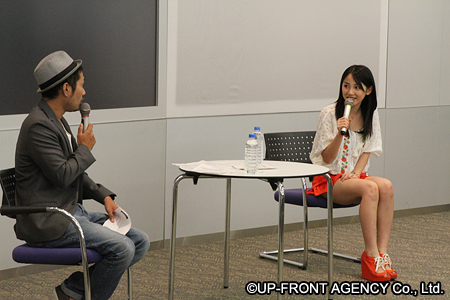 The next short video is a short movie filmed in Okinawa. We can see You carrying a watermelon and saying in English: "I have a suika", this was really cute ;)
(Suika means watermelon).
Then she walks a bit in the water and plays on it. This is the end of the second video.
She said after she likes cherry and but she hates spicy things, specially piments.
She has discovered makomodake and kamesen, special food from Okinawa and has recommended everyone to try to eat those dishes. 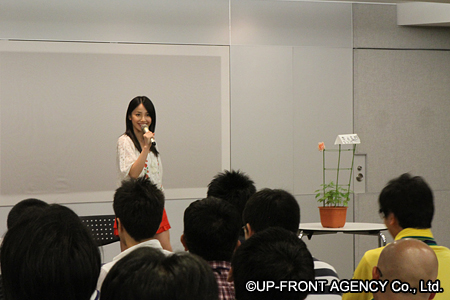 After this, You thanked everyone for their coming, close to Asagao-chan. Almost everyone also has greet the plant, it was nice to see this. 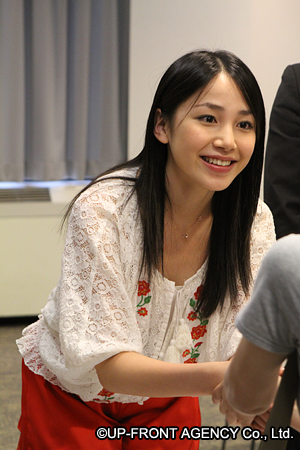 To conclude this report, a special picture for you ;) 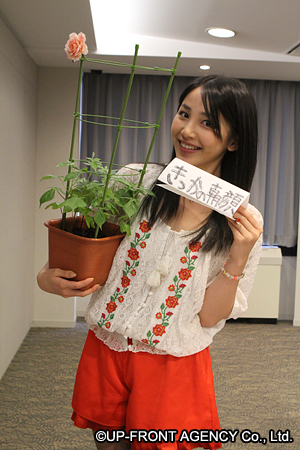 It is written "Kikka no Asagao" in Japanese, which means "Asagao of Kikka".
Posted by UP-FRONT LINK at 17:51 3 comments

Email ThisBlogThis!Share to TwitterShare to FacebookShare to Pinterest
Labels: You Kikkawa

Resume of the 3rd round of S/mileage's auditions

For those who have missed the audition on Nico Nico Douga which has just ended, here is a small resume of the audition show:
- 12 girls for the 3rd round (with 3 Egg and Dayeon Jang),
- each has introduced herself,
- some questions to discover more their personality,
- dance test 4 by 4,
- dance test together on Uchouten LOVE,
- singing test on Uchouten LOVE and their reactions,
- more than 97 000 comments and 29 000 viewers.

For the other ones, your reactions?
Posted by UP-FRONT LINK at 16:20 2 comments

Email ThisBlogThis!Share to TwitterShare to FacebookShare to Pinterest
Labels: S/mileage

On Sunday, Berryz Kobo held 3 special events at Shiodome-AX. The three lives were sold out and the fans were waiting for a long time, even if it was really hot outside.
Those lives were part of the Shiodome☆Idol Carnival! 2011, which is also part of the exposition Nippon Terebi Shiodome Hakurankai 2011!.
The lucky fans could listen to the new You Kikkawa' song (Hapirapi ~Sunrise~) while waiting for the opening of the live house.

As soon as the girls arrived on stage, the concert hall become so hot!!
They wore nice kimonos and began directly to sing. As usual each member gave her best. Rival was on the setlist and it launched a crazy atmosphere in the hall. All were screaming, jumping, moving their penlights on rythm.

And the last song but not the least was their new single, Aa, Yo ga Akeru, a nice one. I am sure you will like it as well as the MV ;)

After a crazy live, they had an handshake time with the public.

As usual, I took pictures just for you, readers of Up-Front Link \o/ 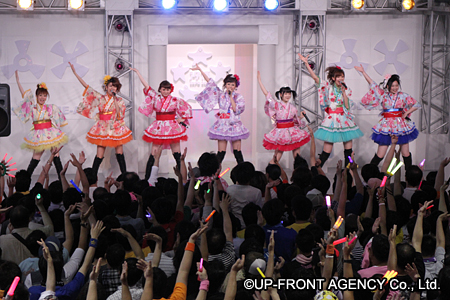 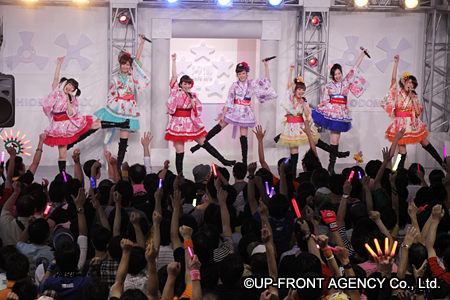 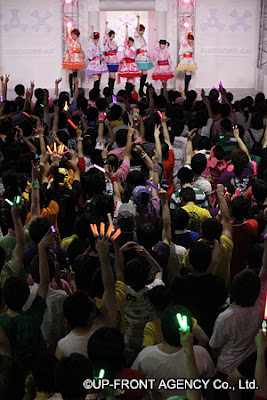 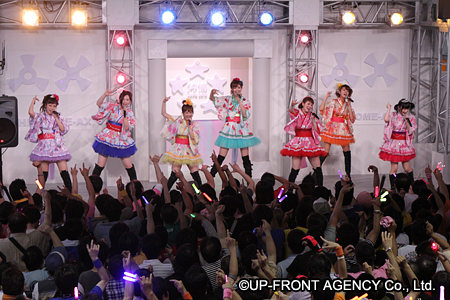 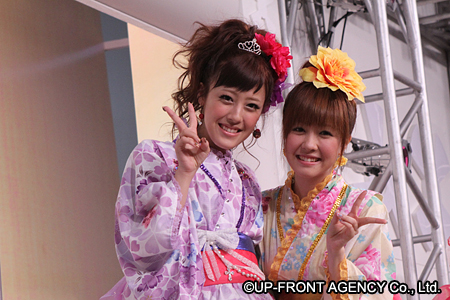 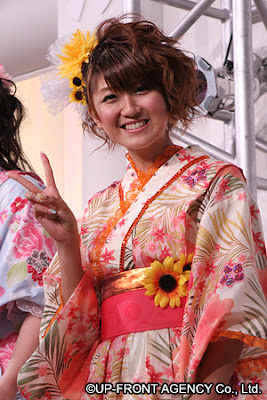 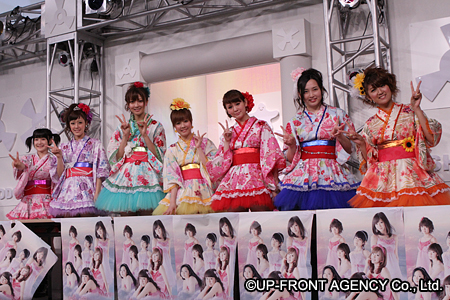 Email ThisBlogThis!Share to TwitterShare to FacebookShare to Pinterest
Labels: Berryz Kobo, You Kikkawa

Tomorrow (July, 27th) the new round for the S/mileage auditions can be seen through the streaming of Nico Nico Douga from 2PM (Japanese Time) here. 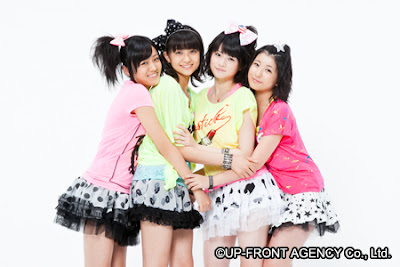